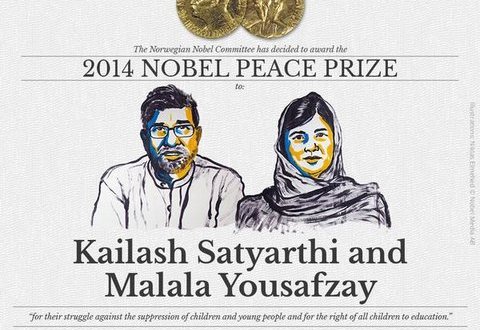 Struggles around the globe to uphold the simplest rights for boys and girls — the right to a childhood, the right to an education — will not end today. Just look to the continuing plight of the kidnapped school girls in Nigeria. But it’s wonderful to see the Nobel Peace Prize bestowed on Malala Yousafzai, the scarred Pakistani defender of a girl’s right to go to school, and Kailash Satyarthi, a longtime Indian campaigner against slave and child labor.

Here’s how the Nobel committee summarized the reasoning behind the award:

Children must go to school and not be financially exploited.  In the poor countries of the world, 60 percent of the present population is under 25 years of age.  It is a prerequisite for peaceful global development that the rights of children and young people be respected.  In conflict-ridden areas in particular, the violation of children leads to the continuation of violence from generation to generation.

Showing great personal courage, Kailash Satyarthi, maintaining Gandhi’s tradition, has headed various forms of protests and demonstrations, all peaceful, focusing on the grave exploitation of children for financial gain.  He has also contributed to the development of important international conventions on children’s rights.

Despite her youth, Malala Yousafzay has already fought for several years for the right of girls to education, and has shown by example that children and young people, too, can contribute to improving their own situations.  This she has done under the most dangerous circumstances.  Through her heroic struggle she has become a leading spokesperson for girls’ rights to education.

The Nobel Committee regards it as an important point for a Hindu and a Muslim, an Indian and a Pakistani, to join in a common struggle for education and against extremism.